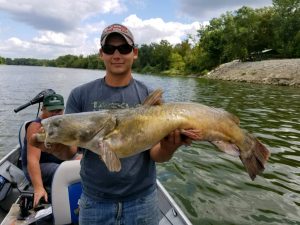 Catfish can be found across Ohio and we have an especially healthy population in the Maumee river, but they vary in types and sizes. Whether it is bullheads in farm ponds, channel catfish and flathead catfish in reservoirs and rivers, many anglers seek catfish not only for their fight but for their table fare as well. Catfish sustain populations by natural reproduction in many habitats. Anglers use a variety of scented baits since a catfish’s sense of smell and taste is excellent. The most effective baits include cut shad, prepared blood bait, chicken livers, 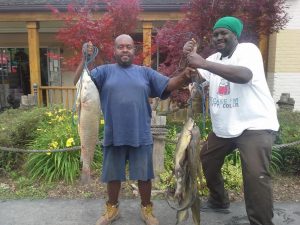 Anglers use a variety of scented baits since a catfish’s sense of smell and taste is excellent. The most effective baits include cut shad, prepared blood bait, chicken livers, shrimp, and nightcrawlers. Keep tackle simple. When fishing on the bottom use a fixed or slip sinker and when fishing the surface or suspended, try either a slip or fixed float. Hook sizes range from size 4 to 6/0 depending on the size of fish you are seeking and the size of bait that you are using. Having a strike indicator is a good idea for catching catfish. Catfish do not “hit and run” like other fish, instead, they move very slowly away with baits.Rods and reels should be matched for the sizes of catfish that you anticipate catching. Standard tackle for channel catfish or bullheads includes medium spinning or baitcasting outfits with 10-12 pound line, whereas, for flathead catfish or blue catfish, heavy rods and reels with 20 or 30-pound line may be required. Reels used for catfish should have a good drag system. 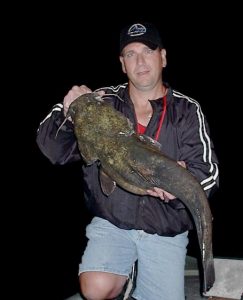 Early spring catfish feed on fish that have died or been stressed throughout the winter. As the water warms, catfish start to take live baits, especially if live fish are available. Early spring anglers should focus on warm water discharges, stream inflow areas of reservoirs, or areas where baitfish are schooling since catfish will start to feed more often. Pre-Summer (May)
Live baits (nightcrawlers, crayfish, etc.) work well during spawning since they entice a bite from spawning catfish. Instead of fishing larger flats, anglers should focus on areas with heavy structure or cavities (downed logs or rip-rap) since most river catfish are cavity spawners.

Excellent, especially at night Prepared baits start to work well this time of year, as do chicken liver, shrimp, crayfish or live fish. In general, the larger the bait, the larger the catfish. Catfish prefer deeper habitats during the day and shallower habitats while feeding at night. Productive night areas include shallow flats next to deeper holes. Fall (mid-September-November)

Catfish tend to eat the most available foods. Schools of open water gizzard shad and bluegills are ideal bait for larger fish because they are common items in catfish diets. Catfish school tightly this time of year in preparation for winter. Fish areas next to deeper waters, especially areas near flats that cool down rapidly at night, or are located near feeder streams.

Catfish are scavengers during winter, so dead minnow or other fish are ideal bait. For a natural presentation, do not move dead baits, particularly since catfish are sluggish this time of year. Catfish prefer deeper water during winter. As waters warm, fish shoreline areas where the wind is blowing against and causing dead baitfish to windrow or accumulate.

Channel catfish possess very keen senses of smell and taste. ] At the pits of their nostrils https://en.wikipedia.org/wiki/Nostrils (nares)are very sensitive odor sensing organs with a very high concentration of olfactory receptors https://en.wikipedia.org/wiki/Olfactory_receptor. Additionally, the channel catfish has taste buds distributed over the surface of its entire body.These buds are especially concentrated on the fish’s four pair of barbels https://en.wikipedia.org/wiki/Barbel_(anatomy) (whiskers) surrounding the mouth — about 25 buds per square millimeter. This combination of exceptional senses of taste and smell allows the channel catfish to find food in dark, stained, or muddy water with relative ease. Channel catfish are omnivorous, which means they eat a wide variety of food items depending on what is available in their environment. They are most attracted to foods that have a strong odor and they have a strong sense of smell to guide them. The diet of the channel catfish is influenced by their size, their location, and the season.

Channel catfish are omnivorous, which means they eat a wide variety of food items depending on what is available in their environment. They are most attracted to foods that have a strong odor and they have a strong sense of smell to guide them. The diet of the channel catfish is influenced by their size, their location, and the season.

Smaller catfish feed mostly on bottom-dwelling organisms such as insect larvae and invertebrates such as snails and clams. As they grow larger their diet changes to include a wider variety of food. Once a channel catfish is larger than 16 inches, live and dead fish become the main source of food. During winter months, especially where ice is present, they will eat the dead fish at the bottom of a lake or river. Throughout spring and summer, channel catfish will feast on an abundance of worms, fish, frogs, crayfish, insects, algae, and any other plant or animals that they find tasty. During the fall, fish and frogs become a larger part of their diet. Although channel catfish are most often caught using natural baits, they can be taken on artificial lures. Lures such as plastic worms, spinnerbaits and jigs will often tempt a channel cat, although natural baits will work better in most cases