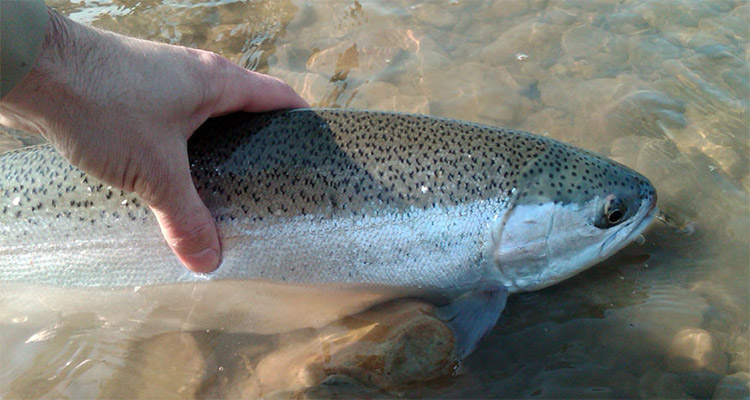 Every fall, hundreds of anglers descend on the Lake Erie tributaries for the annual steelhead spawning runs. However, many hopeful steelheaders, including some who have traveled great distances, go away empty-handed and disappointed.

They approach the steelhead as if it were a typical trout. Yet, the steelhead running the Lake Erie tributaries are unlike any other angling quarry in the state. They require specific equipment, tackle and presentations.

Drift with a noodle

Some of  the most popular tributary streams, are small, clear, slow-moving streams compared to the big, fast, silty steelhead rivers of Oregon, Washington and British Columbia. The clarity and shallowness of the Lake Erie tributaries dictate the need for light line and small hooks and baits so the fish cannot see the line or feel its weight when they strike. Most Erie steelheaders use 4-pound monofilament in either low-visibility clear or green (the tributaries have a green or brownish cast) with hook sizes ranging from 14 to 22.

Noodle rods were specifically designed for this kind of fishing. These ultralight rods, 9 1/2 to 12 feet long, function much like a rubber band to absorb the steelhead’s power. When combined with a multiple-ball-bearing spinning reel with a good drag, a noodle rod can land 15- to 20-pound fish even with 4-pound-test line. This rod-and-reel combination contributes to the fun of fighting a steelhead because line screams off the reel during a steelhead’s runs and the angler soon learns how to use the rod, varying the angle of pressure, to turn fish from snags and fast water.

Use small floats for drift-fishing the Lake Erie tribs. Use floats with weighted stems for longer casts and choppy water.  The extended length of a noodle rod also aids in the primary technique used to take steelhead. Tributary drift-fishing is actually a scaled-down version of the technique used in the Pacific Northwest, where a big hook is suspended from a large float with a piece of pencil lead partway in between. The floats, hooks and sinkers used for Erie drift fishing are much smaller, but the technique is virtually the same. The idea is to present the bait in a natural drift posture (movement of the bait equivalent to the speed of the current) just off the stream bottom. Erie steelhead breach and boil along the surface, but they rarely hit anything outside of their resting positions just off the bottom, except under certain conditions. Suspending the hook vertically 2 to 8 feet below the float, depending on the water depth, with a BB splitshot 12 to 18 inches above the hook, depending on the speed of the current, will put your bait in the strike zone.

Varying the position of the float is critical to achieving a good drift. You can also add splitshot along your leader to compensate for fast water. An ideal drift has the bait riding just off the bottom directly under the float. The longer noodle rod helps in mending your line to eliminate slack in case of a strike. Cast to the top of the hole or run, and drift through it several times along different lines and depths. When the float stops or disappears, simply lift the rod to set the hook and get ready for the fight of your life.

After equipment and terminal tackle, the next important factor in hooking a steelhead is the bait.

Productive baits include minnows, single eggs, egg sacks, skein, wax worms, maggots and nightcrawlers. At times certain baits work better than others, eliminating the need to go through your entire repertoire. Generally, minnows and single eggs are clear-water baits; egg sacks and skein work best when the water is murky or muddy; wax worms, maggots and ‘crawlers tend to be universal. 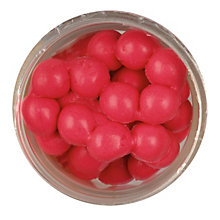 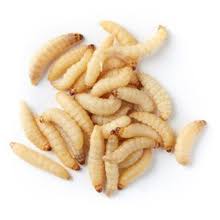 Some Erie steelheaders fish only microjigs, varying color, size (1/80-ounce, 1/64-ounce and 1/32-ounce), and material (bucktail or marabou) to meet different conditions. Most anglers tip these jigs with wax worms for taste. Jigs work best when the surface has a slight chop, whether from wind or current, because it increases the jig’s bobbing action.

Jigs also produce in very deep water (over 8 feet) and are one of the few presentations that causes steelhead to rise from the bottom. Spinners and spoons (1/12-ounce and 1/8-ounce) work best during a run of fresh fish and at higher water temperatures.

Different species of sucker enter the tributaries in the spring to spawn, and lures that imitate their egg clusters are effective, especially in spring.

Water temperature of 50 to 55 degrees is ideal because the fish are extremely spunky and aggressive. This is when they will chase lures, such as spinners and spoons. When the water temperature falls below 49 degrees, the fish become sluggish and require a perfect presentation drifted right past them to generate a strike.

Another important variable to assess is the water level and color. When the streams are low and clear, smaller is better. A single egg is the most popular bait at such times. Many steelheaders have begun using a fluorocarbon leader, which is tied on with a double surgeon’s knot or to a swivel, during low, clear conditions because fluorocarbon is invisible in water. Black is a better lure color in clear water–white in murky water. When the water is high and colored, the bigger baits (egg sacks, skein, etc.) tend to work best. Also, even in rain, runoff and rising water usher in fresh runs of fish. The action tends to be better when the streams have crested and started to fall.

High, muddy water requires a completely different technique. Under these conditions, fish the fast water with a larger hook (sizes 8 to 12) and four large splitshot in a line 6 to 8 inches above the bait using a bottom-bouncing technique with light-colored sacks or maggots.

With significant cloud cover or during rain and snow, stay away from reflective baits and use egg sacks, skein and other natural baits.

The key to successful steelhead fishing lies in evaluating the conditions so you select the appropriate presentation to coax a strike. Once you have hooked and landed one of these screaming silver bullets, you are sure to want to do it again and again.